In his speech, King Benjamin wished to not only teach his people but have them make commitments, creating a society of followers of God. 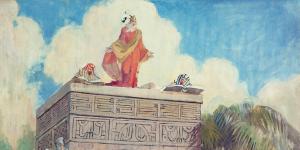 Why Is the Theme of Kingship So Prominent in King Benjamin's Speech?
Mosiah 1:10 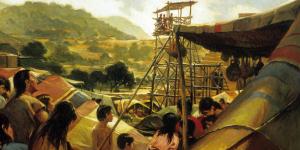 Why Did the Nephites Stay in Their Tents During King Benjamin’s Speech?
Mosiah 2:6 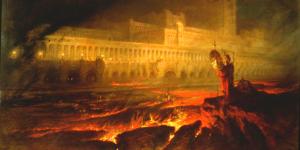 Why Do the Scriptures Compare Hell to an Unquenchable Fire?
Mosiah 2:38

Chart 85: "King Benjamin's Coronation of Mosiah," from Charting the Book of Mormon

The coronation of Mosiah by King Benjamin was a grand ceremonial event that parallels the installation of kings in ancient Israel and other Near Eastern countries of antiquity, suggesting that the Nephites continued to practice Old World traditions in the Americas. Coronations were important ritual acts in the ancient Near East, including, among other things, anointing the new king, installing him in office with insignia, and presenting him to the people--elements that Benjamin's ceremony also contained.

Chart 86: "Three Steps in Benjamin's Logic on Service," from Charting the Book of Mormon

King Benjamin, in his great discourse to the people in the land of Zarahemla, answers the question "Why should we serve?" In his speech recorded in Mosiah 2-5, he provides a logical yet somewhat surprising explanation for service. Benjamin speaks about service to God, our debt to God, and knowing God. On one level, a certain logic is embedded within each of these individual statements. On another level, the relationship between them is also logical and interdependent. If we serve men, then we only (merely) serve God. This does not win us great credit, for when we serve God, he blesses us and we are continually in his debt. Thus we have no reason to boast. Why, then, should we serve? If we are humble in our service, we will know God. Knowing the Master whom we serve is the great blessing that profits us more than anything else. This, to Benjamin, is the ultimate reason for service.

Chart 87: "Overview of Benjamin's Speech," from Charting the Book of Mormon

This chart is an outline of the chiastic nature of King Benjamin's speech to the people at the temple of Zarahemla. In it are seven major sections separated by interruptions or intervening ceremonial acts. The overall structure of the text follows an A-B-C-D-C'-B'-A' pattern: the atonement of Jesus Christ is the crux, or center, of the speech (section D), the angel's and Benjamin's testimonies of the atonement are found on either side of it (sections C and C'), the behavior of the people is addressed in sections B, and B' and sections A and A' address God and his relationship with the people. Further chiasms can be found on the sentence level, indicating that this speech was highly structured for the occasion. The evidence of chiasmus in the Book of Mormon attests to its artistry and antiquity. For a more detailed explanation of chiasmus, refer to charts 128-33.

Moses declared to gathered Israel, "Love the Lord your God, and...serve him with all your heart and with all your soul" (Deuteronomy 11:13). Since this declaration, many rulers of the house of Israel have vacillated in their love of and service to the Lord. King Benjamin's reign radiates with the brightness, hope, and love of a righteous Christian kind. His example is an ensign to rulers and a beacon to all disciples of Christ. King Benjamin placed on the mysteries of God and service and to show how these concepts are interrelated.

"King Benjamin and the Feast of Tabernacles,"(link is external) by John A. Tvedtnes, from By Study and Also By Faith

Tvedtnes also analyzes the Israelite autumn festivals in conjunction with King Benjamin's speech, but in this case zeros in on the Feast of Tabernacles. This festival was traditionally celebrated in tents, as reflected in the multitude listening to King Bejamin's speech in the Book of Mormon. The autumn festivals were also a time of covenant renewal and coronation. This fits well with the coronation of King Mosiah in Benjamin's discourse.

"Did Jacob Refer to Ancient Israelite Autumn Festivals?"(link is external) from Book of Mormon Central

This article once again focuses on ancient Israelite festivals in the Book of Mormon, but this time focusing on Jacob's use of these festivals in his speech to his people (2 Nephi 6-10). Finding Israelite ritual in Jacob's sermons can help the reader draw additional connections to such festivals in King Benjamin's speech.

"The Use of King Benjamin's Address by Latter-day Saints,"(link is external) by Bruce A. Van Orden

While critical analysis may aid in understanding the historical setting of a passage, an examination of modern exegesis is necessary to discover what a particular passage means for contemporary readers. Apparently in the early years of the church, when the Saints were still initially exploring Book of Mormon texts, they rarely referred to Benjamin’s words. Over time, however, the speech has grown immensely in popularity, and recent generations have referred to it more often than any other section of scripture. To demonstrate this growth, this article includes a table and the results of a survey. The first discusses the doctrines taught in general conference addresses that rely on Benjamin’s speech for scriptural support. The second gives a chronological survey of many other commentaries by Latter-day Saint writers concerning the speech.

"King Benjamin's Sermon: A Manual for Discipleship,"(link is external) by Neal A. Maxwell

We have no biography of King Benjamin; nevertheless, we have his words, which are what we most need for our discipleship. The combined efforts of the angel who inspired King Benjamin and King Benjamin himself, together with the selectivity of Mormon as editor have given us high relevancy amid the paucity of the Benjamin pages. Of course, while a special portion of King Benjamin’s sermon was directed by an angel, angels, in turn, “speak by the power of the Holy Ghost” in what is a seamless process (2 Nephi 32:3).

Since the Book of Mormon itself “shall go from generation to generation as long as the earth shall stand” (2 Nephi 25:22), this means, much as we appreciate them today, that the words of King Benjamin will have their widest and greatest influence—personal and global—in the decades ahead.