Book of Mormon Central / Come Follow Me / Book of Mormon
Gospel Doctrine Lesson #16: Ye Shall Be Called the Children of Christ

To encourage class members to seek and maintain the “mighty change” of heart that comes through exercising faith in Jesus Christ. 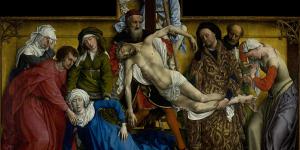 Why Does King Benjamin Emphasize the Blood of Christ?
Mosiah 4:2 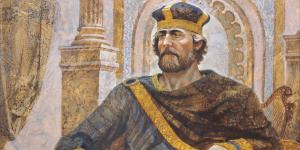 Why Did King Benjamin Use Poetic Parallels So Extensively?
Mosiah 5:11 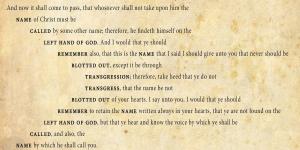 Why Is the Presence of Chiasmus in the Book of Mormon Significant?
Mosiah 5:10-12 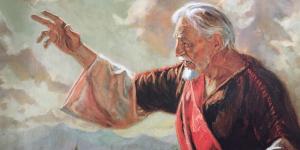 Why Were Benjamin and Mosiah Such Beloved and Effective Leaders?
Mosiah 6:6

Chart 89: "Benjamin's Themes Related to the Day of Atonement"

Chart 100: "Treaty-Covenant Pattern in the Old Testament and Benjamin's Speech"

Covenant-making has been studied by scholars as a fundamental part of ancient Near East society, both in civic life and in religion. Studies of Assyrian and Hittite treaties as well as passages from the Old Testament show that ancient treaties or covenants followed a relatively consistent pattern. In BYU Studies (24:2, 1984), Professor Stephen D. Ricks shows in ample detail that this pattern is also present in King Benjamin's address to his people. The pattern includes a preamble, sharing of antecedent history, outlining individual stipulations, participants giving oaths of acceptance, warnings of curses to attend covenant-breakers, promises of blessings to covenant-keepers, and the recording and depositing of the text. Not only does this pattern help modern readers to take their own personal covenants more seriously, but also, as Ricks writes, "the extent to which the Book of Mormon accords with ancient Near Eastern canons of literary style and structure may...provide a test of authenticity" for the reality and validity of the Book of Mormon.

This paper presents five simple, yet powerful scriptural lessons from the book of Mosiah that parents can teach their children. It will also give practical suggestions on how to make these principles in the right spirit, they will be better able to reach out to them in love as they invite them to live by the light of the gospel.

King Benjamin’s covenant language in Mosiah 5 figures seminally as an early text to which Jesus was apparently alluding when he articulated in 3 Nephi 18 words that provided the basis for the final form of the Nephite sacrament prayers in Moroni 4–5. A historical, textual relationship exists between the words of the Nephite covenant text of King Benjamin, the words of Jesus in 3 Nephi 18, and the phrases used in the Nephite sacrament prayers; the precision and persistence of basic terms throughout all three of these texts, separated from each other by many years and pages of Nephite history, speak highly of the faithful and logical orderliness, the linguistic sensitivity, and the progressing revelation and inspiration present in this history.

King Benjamin had been praying for his people; in response, an angel appeared with an important announcement. The king then summoned his people to the temple to receive the angel’s message in connection with a sacred name. The people embraced the angel’s message, were born again, and entered into a holy covenant. In this simple statement of basic facts from the Book of Mormon account, we discover at least four interesting questions: (1) What was Benjamin’s role in the rebirth experience at the temple, and for what was he praying? (2) What was it the angel came to announce? (3) How would the name the king gave his people distinguish them from earlier Nephites, who, for five hundred years, anticipated the coming of Christ? (4) What was the nature of the change that the people received, and what does it all have to do with the mysteries of God? In the pursuit of answers to these questions, we will explore the nature of priesthood and its relationship to the mystery of spiritual rebirth.

The contributors examine this speech in the multifaceted contexts in which it was delivered: as a classic speech of a departing leader near the time of his death, as the focus of an annual festival season mandated anciently under the law of Moses, as part of a covenant renewal ceremony delivered within the sacred precinct of the Nephite temple in Zarahemla, and as preparation for the coronation of a new king. Historical and linguistic tools and information are employed in these essays to help the reader to better grasp the speech’s historical setting, its doctrinal implications, its literary qualities, its influence then and now, and its overall brilliance.

King Benjamin’s inspired words influenced Book of Mormon prophets for generations, and they continue to reach across time to stir countless people today. King Benjamin’s Speech Made Simple is a popular abridgment of the expansive volume King Benjamin’s Speech: “That Ye May Learn Wisdom.” Prepared with the general reader in mind, this streamlined version presents the essential contents of the original book. Eleven studies examine the classic speech from many angles, viewing it as a manual for Christian discipleship, a coronation and covenant-renewal text, an ancient farewell address, a key part of a religious celebration, a prophetic lawsuit, a masterful oration of stunning structural complexity, and much more. It acquaints readers with a great religious leader whose wisdom, inspired teachings, and parting testimony invite studious attention and lasting admiration. This book is a rich resource, spotlighting and making simple the profound meanings and intriguing complexities of Benjamin’s carefully wrought words.

In his speech at the temple, King Benjamin taught us how to become saints through the Atonement of Christ. Elder Maxwell emphasizes the different aspects of King Benjamin's speech that draw us closer to our Savior.

"King Benjamin: The Drama's Sacral Kingship is About Being a Child of God,"(link is external) by LeGrand Baker, in Who Shall Ascend into the Hill of the Lord: The Psalms in Israel's Temple Worship in the Old Testament and in the Book of Mormon

While LeGrand Baker recognizes the importance of the Israelite religious festivals surrounding this speech, he approaches King Benjamin's speech and the coronation of Mosiah as an exposition on our divine heritage.

"King Benjamin: In the Service of Your God,"(link is external) by Susan Easton Black, in A Book of Mormon Treasury: Gospel Insights from General Authority and Religious Educators

Susan Easton Black takes a humanitarian approach to King Benjamin's speech as she outlines how King Benjamin exemplified his own teachings. King Benjamin was among the people and spent his days serving his people, just as God commands us to do. She concludes by connecting service with the Atonement. We are all in need of service, and as we serve others we can receive a remission of our sins, as King Benjamin teaches us in Mosiah 4:26.

"The Natural Man: An Enemy to God,"(link is external) by Robert Millet, in The Book of Mormon: Mosiah, Salvation Only Through Christ

Robert Millet takes a devotional approach to King Benjamin's speech, reflecting on man's natural disposition in comparison to becoming as God. Millet attends primarily  to  a doctrinal  message  about  humanity  that  was delivered to king Benjamin  by an angel of God. At the same time he considers related passages in the Book of Mormon which  bear  upon  and  amplify  this  timeless  truth—that  the natural man is an enemy to God and a foe to all righteousness.

King Benjamin’s speech focuses almost entirely on service, repeating four variations of the word—servants, serve, served, and service—fifteen times in only eighteen verses. Benjamin gave the discourse in such a manner that his audience could have understood service in multiple ways. Given the significant temple setting for the discourse and the references to temple service in the Old Testament, Parry seeks to highlight the emphasis on temple service. To further strengthen his focus on temple service, Benjamin links service to the concept of blood on garments and his need to wash his garments of his people’s blood, bringing to mind the priests with blood on their garments fromtemple rituals, who were required to wash their garments. The temple setting, where sacrifices were made under the law of Moses, and the focus on service point to Jesus Christ’s atoning sacrifice—the supreme and final act of service.

"Democratizing Forces in King Benjamin's Speech,"(link is external) by John W. Welch, in Pressing Forward with the Book of Mormon

In Mosiah 6, we read that every soul had entered into the covenant and had taken upon them the name of Christ. In this narrative we see a profound equality of society, where an entire people take part in the same covenants and contribute to egalitarian principles. In King Benjamin's speech, we read of many principles that contribute to an equal society in Christ. King Benjamin himself serves as an example of noble humility, in working among his fellow men, instead of lording above them.

"Becoming Sons and Daughters at God’s Right Hand: King Benjamin’s Rhetorical Wordplay on His Own Name,"(link is external) by Matthew L. Bowen, Journal of the Book of Mormon and Other Restoration Scripture 21, no. 2 (2012): 2-13.

Royal sonship is a key theme of Mosiah 1–6, including King Benjamin’s seminal address at the temple in Zarahemla (Mosiah 2–5) on the occasion of his son Mosiah’s enthronement. Benjamin, however, caps this covenant sermon not with an assertion of his son’s royal status and privileges, but with a radical declaration of his people’s royal rebirth (or adoption) as “the children of Christ, his sons and his daughters” (Mosiah 5:7) and their potential enthronement at God’s “right hand” (5:9). Similar to rhetorical wordplay involving proper names found in the Bible, the Book of Mormon, and other ancient texts, Benjamin’s juxtaposition of “sons”/“daughters” and the “right hand” constitutes a deliberate wordplay on his own name, traditionally taken to mean “son of the right hand.” The name of Christ, rather than Benjamin’s own name, is given to all his people as a new name—a “throne” name. However, he warns them against refusing to take upon them this throne name and thus being found “on the left hand of God” (5:10), a warning that also constitutes an allusion to his name. Benjamin’s ultimate hope is for his people’s royal, divine sonship/daughterhood to be eternally “sealed.”