To emphasize that the scriptures have been prepared and preserved to guide and direct us. 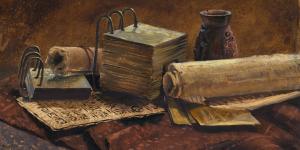 Why Do the Authors on the Small Plates Follow a Pattern?
Jacob 7:27 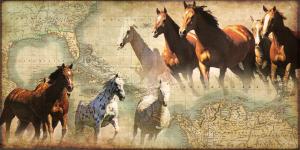 Why Are Horses Mentioned in the Book of Mormon?
Enos 1:21 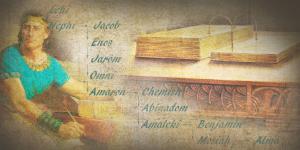 Why Were Genealogies Important to Book of Mormon Peoples?
Jarom 1:1 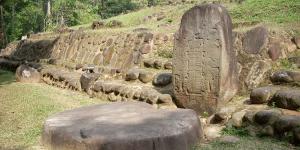 Why Was Coriantumr's Record Engraved on a "Large Stone"?
Omni 1:20 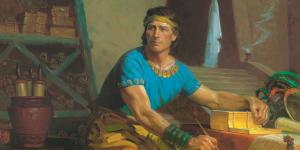 The Book of Mormon is exceptionally conscientious about helping readers know the various records and sources from which Mormon and Moroni drew, as Mormon's comments in the Words of Mormon exemplify. Yet many readers get lost in this complex library of ancient sources. To help readers follow this textual history, Chart 13 organizes the many sources that went into this assemblage. Despite the effects of selection, extraction, abridgment, and translation, the clearly important messages from these various underlying Book of Mormon records have been preserved for us, centuries later.

Chart 20: "Writings of Mormon," from >Charting the Book of Mormon

As this chart demonstrates, Mormon's editorial commentaries, skillfully woven into the text of the primary authors, provide important explanations of human nature, the gathering of Israel, the Book of Mormon in the latter days, and the Savior's visit to the Americas. His own writings include, among other things (not all of which are listed on this chart), an autobiography and important sermons or letters on good works and infant baptism.

Chart 23: "Average Number of Pages Covering One Nephite Year," from Charting the Book of Mormon

The number of pages in the Book of Mormon given to each year of Nephite history varies significantly. Some shorter books cover long periods of time, and longer books document relatively few years.

The narratives in the book of Mosiah do not always follow in strict chronological order. The two major flashbacks, Zeniff's and Alma's accounts, illustrate that the book of Mosiah was put together by use of historical records of several authors. These flashbacks also attest to the historicity of the Book of Mormon, because it would have been difficult for the Prophet Joseph Smith to dictate these historically complex flashbacks and still keep his facts straight. In this chart, the bars represent the narrative content and flow of the books of Omni and Mosiah over time, while the two flashback episodes are shown in relation to their placement in the book of Mosiah and to the time spans they cover, which predate the time of Mosiah.

This chart features chapters of doctrinal significance from the small plates of Nephi (which comprised 1 Nephi through Omni) along with short descriptions of their contents. These chapters include Lehi's vision of the tree of life, the psalm of Nephi, and various discourses on the atonement of Jesus Christ. Just as readers of the Book of Mormon find it useful to memorize key scriptures, it is also helpful to become familiar with key chapters in order to remember the overall contents of the book and to remember and to utilize its teachings better.

"When Pages Collide: Dissecting the Words of Mormon," by Jack M. Lyon and Kent R. Minson, from BYU Studies, Volume 51, no. 4

Careful readers of the Book of Mormon have probably found verses 12-18 of the Words of Mormon to be a bit of a puzzle. For stylistic and other reasons, they do not really fit with verses 1-11, so commentators have tried to explain their presence as a sort of "bridge" or "transition" that Mormon wrote to connect the record of the small plates with his abridgment from the large plates. This paper proposes a different explanation: Rather than being a bridge into the book of Mosiah, these verses were originally part of the book of Mosiah and should be included with it.

At the beginning of the Words of Mormon, written in approximately AD 385, Mormon tells us that he is about to turn the record he has been making over to his son Moroni. He points out that he has witnessed the destruction of almost the entire Nephite nation and that he believes Moroni will witness their final destruction. He hopes that Moroni will survive him and add more to the record. Then, beginning in verse three with the words, "And now, I speak somewhat concerning that which I have written," Mormon briefly outlines which records were being incorporated into his abridgment and why. This short explanation gives some of the most direct evidence available to us of how the Lord structured the Book of Mormon through his servant, Mormon.

Mormon was not the only writer to do this. Throughout the book the writers frequently tell us what they are including and why they are putting it in, and what they are leaving out and why. An examination of all their explanations (with special emphasis on those in the Words of Mormon) provides powerful evidence of some things the Lord intends that we get from the book and some ways he would have us approach the book. This paper examines that evidence.

As scripture, the writings of Enos contribute to both doctrine and instruction. Although Enos' words are few, his doctrine and commentary support other writers throughout the Book of Mormon and other scriptures. Gospel principles are embedded in his struggle to know God and in his determination to serve him. There are nine such supported precepts of "instructions in righteousness" that make Enos a most significant "voice from the dust."

"'And There Wrestled a Man with Him' (Genesis 32:24): Enos's Adaptations of the Onoamstic Wordplay of Genesis,"(link is external) by Matthew L. Bowen, from Interpreter: A Journal of Mormon Scripture(link is external)

In this brief note, Bowen suggests several instances in which the Book of Mormon prophet Enos utilizes wordplay on his own name, the name of his father “Jacob,” the place name “Peniel,” and Jacob’s new name “Israel” in order to connect his experiences to those of his ancestor Jacob in Genesis 32-33, thus infusing them with greater meaning. Familiarity with Jacob and Esau’s conciliatory “embrace” in Genesis 33 is essential to understanding how Enos views the atonement of Christ and the ultimate realization of its blessings in his life.

After the books of Nephi, much of the Book of Mormon history gets lost on readers hurriedly seeking to reach the next book. Bushman instead describes the sequence of events and delves into the possible psyche of each of these Book of Mormon authors.

"The Prayer of Enos,"(link is external) by Kevin G. Pace and Mark R. Fotheringham

This is the sheet music of a musical composition in hymn style. An audio file is included.

"Enos and the Words Concerning Life,"(link is external) by David R. Seely, in The Reader's Book of Mormon: Big Lessons from Little Books: 2 Nephi 4 - Words of Mormon

The  Book of Mormon contains many detailed accounts illustrating  the power of  the  "word,"  or  "words," in  bringing individuals to Christ through repentance. The Book of Mormon contains the "words ... concerning eternal life" (Enos  1:3), meaning the doctrines of salvation as delivered by the Lord and his servants. Through historical examples  it  demonstrates  the  power  of  such  words  to  change lives. In addition, the collection of the words about eternal life contained in the Book of Mormon invites all men to come unto Christ by serving as a witness to the divine work accomplished by Joseph Smith in the restoration of the correct doctrines and the ordinances necessary for salvation.

"The Father's Command to Keep Records in the Small Plates of Nephi,"(link is external) by John W. Welch, from F.A.R.M.S. Preliminary Report, 1984

Among the descendants of Jacob were Enos, Jarom, Omni, Amaron, Chemish, Abinadom and Amaleki. Over several   centuries these eight men wrote the last twenty-six pages of the Small Plates of Nephi. With the exception of Jacob (who wrote all but about seven of these pages), they do not appear eager to write, nor do they seem to have much to say. It is interesting, however, that they manifest a strong sense of duty about writing what little they do. This paper will show that the duty they felt was well defined by a specific command given by Nephi to their father Jacob, and that all eight writers were meticulous in seeing that this duty was fulfilled.

This article outlines the structure of what we know as the Book of Mormon. The Book of Mormon is comprised of different sets of plates that can be confusing for readers to keeps straight. This article goes through what was included in the Large Plates, the Small Plates, and the role that Moroni had as redactor of these plates.