New Book Explores Political Rhetoric in the Book of Mormon 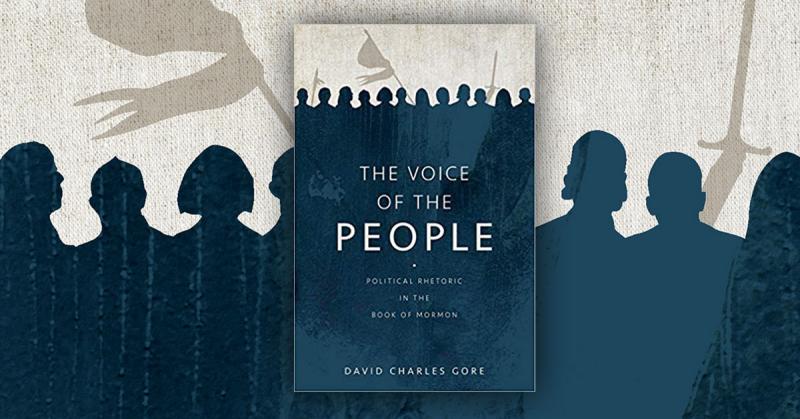 The book cover of The Voice of the People: Political Rhetoric in the Book of Mormon

David Charles Gore, The Voice of the People: Political Rhetoric in the Book of Mormon (Provo, UT: Neal A. Maxwell Institute for Religious Scholarship, 2019). 227 pp. $15.95

Mosiah 29–Alma 2 narrate a pivotal moment in Nephite history. This was the period when the Nephites switched from being a monarchy to being ruled by a hierarchy of judges. It was also the period that saw dissenters like Nehor and Amlici put the new Nephite government to the test. What can we learn from reading these chapters carefully? Specifically, what do they tell us about the sort of rhetorical maneuvers that the Book of Mormon authors and personalities used to advocate for their political ideals? What principles can we draw from them and apply to modern politics? These and other important questions are explored in David Charles Gore’s new book The Voice of the People: Political Rhetoric in the Book of Mormon.

Published by the Neal A. Maxwell Institute for Religious Scholarship as the final volume in the Groundwork: Studies in Theory and Scripture series, The Voice of the People “argues that this Latter-day scripture invites readers to cultivate a sober, wakeful approach to political discourse. To eschew self-indulgent politics in favor of a politics oriented toward others. Being with others and being for others is never easy. But by shouldering this work to persuade and be persuaded of the good we can make our political situation more prosperous and more enduring.”

Chapter 3 in the book analyzes what exactly resulted from Mosiah’s reforms. Here Gore takes a look at the new constitution devised by Mosiah that installed the system of judges and reformed Nephite laws. Gore observes that “while not a democracy in a constitutional or institutional sense, the government established by Mosiah does call for individuals to check themselves and take responsibility for the public good” (p. 119). Among others, Gore draws from the earlier work of Richard Bushman arguing that Mosiah’s constitution does not show much affinity to modern American republicanism.1 Overlooked, however, is Gregory Dundas’ recent important article further situating Mosiah’s reforms in the context of ancient kingship ideology and so-called “proto-democracies,” under which Mosiah’s ultimately unsuccessful political experimentation with judgeship might be plausibly classified.2

The final two chapters in The Voice of the People look at the Nehorite crisis that quickly put Mosiah’s reforms to the test. Nehor and his disciple Amlici are depicted in Alma 1–2 as some of the most dangerous threats to Nephite sovereignty and righteousness. While their message (especially Nehor’s) were grounded in religious and metaphysical claims, political endeavors, such as Amlici’s ambition “to be a king over the people” (Alma 2:2), were also undertaken by these pretenders. Gore looks at the rhetoric utilized by Nehor and Amlici and contrasts such with the earlier rhetoric of Mosiah and Alma the Younger. Nehor and Amlici are persuasively argued by Gore to be effective narrative foils in Mormon’s portrayal of Mosiah and Alma.

While I found Gore’s book to have many interesting and important insights, one drawback that I could anticipate for average Latter-day Saint readers is that Gore’s writing at times tends to somewhat meander and doesn’t always seem focused. Readers should be advised to take their time with this book and digest it slowly, since Gore covers a lot of interlocking topics that do not always lend themselves to straightforward interpretation.

The Book of Mormon is read best when it is read carefully. In my experience this holds especially true for the chapters covered in The Voice of the People; chapters that I have found especially fascinating. A close reading of these texts reveals that “the political theology in the Book of Mormon . . . invites us yet again to a different way of thinking about ourselves and our communities. It invites us to look on the inward heart rather than on the external trappings of power and wealth” (p. 201). Gore has clearly put in commendable effort to read the text carefully and offers an intriguing and timely way to make sense of how the Nephite record is relevant for us today.