Book of Mormon Central / Come Follow Me / Book of Mormon
Gospel Doctrine Lesson #37: Whomsoever Will Come, Him Will I Receive

To help class members understand the fulfillment of Samuel’s prophecies and the blessings available to those who come unto the Savior. 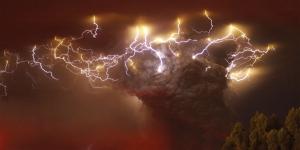 What Caused the Darkness and Destruction in the 34th Year?
3 Nephi 8:20 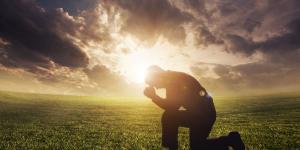 Why Did Jesus Tell All People to Sacrifice a Broken Heart and a Contrite Spirit?
3 Nephi 9:19-20 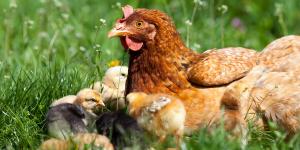 Why Did Jesus Christ Compare Himself to a Hen?
3 Nephi 10:4 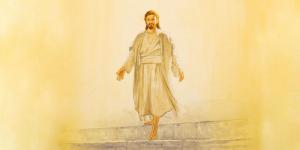 Why Has 3 Nephi Been Called “the Focal Point, the Supreme Moment” in the Book of Mormon
3 Nephi 11:10 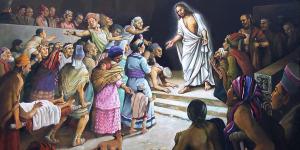 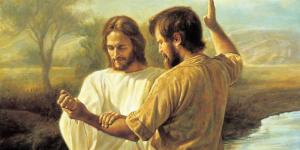 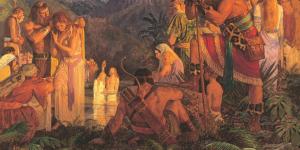 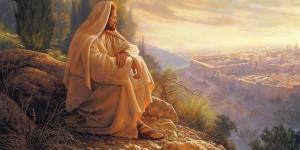 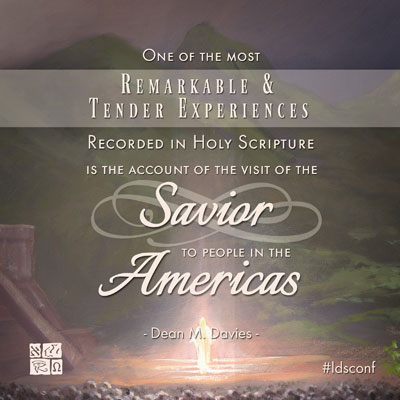 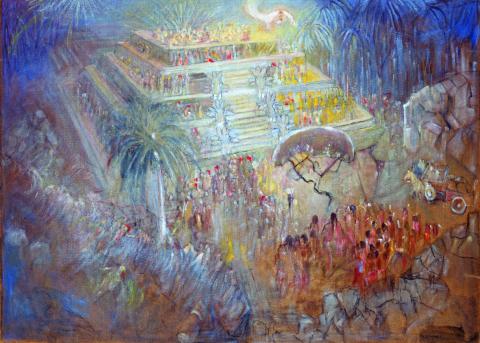 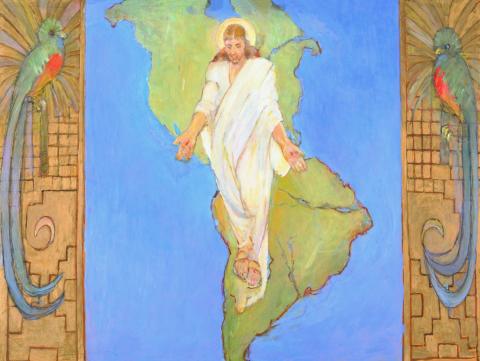 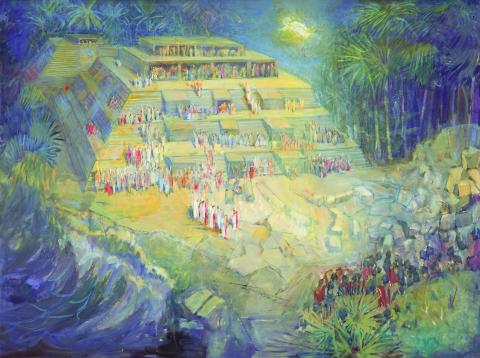 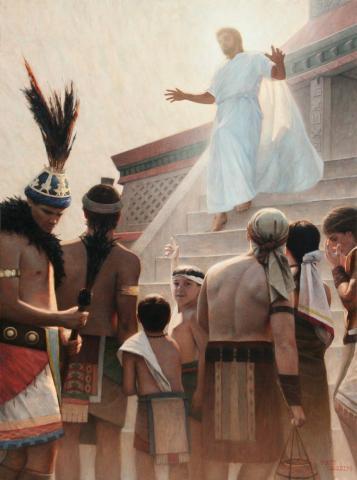 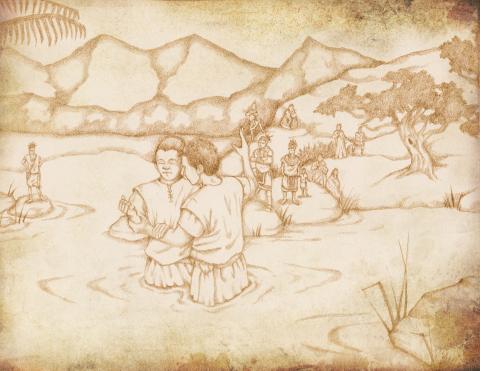 Aspects of the three days of darkness following the three-hour period of intense destruction described principally in 3 Nephi are discussed, including: (1) the strange absence of rain among the destructive mechanisms described; (2) the source of the intense lightning, which seems to be unaccompanied by rain; (3) a mechanism to account for the inundation of the cities of Onihah, Mocum, and Jerusalem, which were not among the cities which “sunk in the depths of the sea”; and (4) the absence in the histories of contemporary European and Asiatic civilizations of corresponding events, which are repeatedly characterized in 3 Nephi as affecting “the face of the whole earth.”

Both the prophecies on the birth of Christ and the death of Christ were fulfilled in great detail. The destruction indeed altered the whole land of the Nephites. This article discusses the nature of the destruction and possibilities for the upheaval of the land, as well as the vapor of darkness.

This article puts forth arguments to determine the dating of Jesus Christ's birth and death, in response to a BYU Studies article from 2010.

The Bible does not explicitly state on which day of the week the Savior was crucified, and the passages describing the length of time he spent in the tomb can be interpreted in multiple ways. Depending on how days were measured and on what Sabbath the day of preparation preceded—whether the weekly Sabbath or the Passover Sabbath—the crucifixion could plausibly have occurred on Wednesday, Thursday, or Friday. The Bible and history have not been able to determine on which day of the week the crucifixion occurred, but the Book of Mormon gives additional information to establish the day. Based on a comparison of the passages in the two texts and an examination of time differences between the two hemispheres, Thursday appears to be the most plausible solution.

An Egyptian stele that documents a violent volcanic eruption finds many parallels with the description found in the Book of Mormon of the destruction in 3 Nephi. John Gee asserts that this may be evidence for volcanic activity causing the great destruction in the land.

Jerry Grover documents how earthquakes and volcanoes can often occurr together in cataclysmic events, accounting for both the darkness and the land upheaval in 3 Nephi.

This detailed analysis provides criteria for identifying what kind of earthquake may have destroyed the Nephite lands, and what fault zone it may be located in. He determines that the Veracruz fault segment satisfies all of the necessary conditions given in the Book of Mormon as the primary earthquake fault system.

Some of the destructive events recorded in 3 Nephi are dependent on seasonality and the timeline of the events. Grover proposes several possible dates for Christ's death, and thus the destruction found in 3 Nephi.

This article proposes a methodology for further research on the potential volcanic activity at the time of Christ's death. The author suggests that the next step in research, is to take sediment core samples from lakes in Mesoamerica to find ash layers that correspond to the dating proposed in the Book of Mormon.

Third Nephi 8 preserves a written account of a natural disaster at the time of Christ’s death that many assume to have been caused by volcanic activity. In a modernday science quest, the author examines research done on glacial ice cores from Greenland and  Antarctica. Ice-core records can reveal volcanic gases and ashes that are carried throughout the world—the gases are detected by measuring the acidity of the ice at various layers. Many factors influence the findings and the proposed datings of the volcanic events. The ice-core records offer some evidence, though not conclusive, of a volcanic eruption around the time of Christ’s death.

Geological studies and eyewitness accounts of volcanic activity show the likelihood that the massive destruction reported in 3 Nephi was caused by an explosive volcanic eruption.

To the nonbeliever, the wide variety of destructive forces unleashed in the New World at the time of Christ’s crucifixion seems preposterous or, at the very least, unscientific. The account in 3 Nephi 8–9 mentions the simultaneous occurrence of earthquake, fire, strong winds, extensive flooding, the complete burial of cities, and thick darkness. An examination of known great natural disasters in historical times reveals that the Book of Mormon in no way exaggerates. All of the destructive forces mentioned in 3 Nephi 8–9 can be readily explained in terms of the tectonic forces that result from the encounter of the plates on which the continents and the oceans lie. The complex variety of destructive forces that we normally consider to be separate phenomena of nature is, in reality, strong evidence for the historicity of the Book of Mormon account.

The timing of volcanic eruptions in the Veracruz area, where many scholars suggest the Book of Mormon may have taken place, is contemporary with events recorded in the Book of Mormon, thus providing further evidence of the authenticity of that book.

Rappleye, Neal. "'The Great and Terrible Judgments of the Lord': Destruction and Disaster in 3 Nephi and the Geology of Mesoamerica." Interpreter: A Journal of Mormon Scripture 15 (2015): 143-157.

Over recent decades, several Latter-day Saint scholars and scientists have offered analysis and comparison to geologic events and the destruction recorded in 3 Nephi 8-9. Jerry Grover makes an important contribution to this literature as he provides background on geologic processes and phenomena, details the geologic features of the Tehuantepec region (Mesoamerica), and applies this information to not only the description of 3 Nephi 8-9, but other incidents in the Book of Mormon likely connected to geologic events. In doing so, Grover yields new insights into the narratives he examines, and adds clarity to geographic details that have been subject to varying interpretations.

Matthew Roper notes that a side effect of large volcanic eruptions is lessened agricultural productivity. The crops are destroyed and the soil is damaged so that it is difficult for crops to grow. This may be connected to Mormon's statement that it took 59 years for the land to be prosperous again.

Blanch discusses the beautiful and powerful message of repentance found in 3 Nephi when the Savior's voice is heard throughout the land. He laments how he would have gathered them as a hen if they would only repent.

In this article, the author suggests an alternate cause for the "many great and notable cities [being] sunk" in 3 Nephi.

After the destruction in 3 Nephi, the voice of Christ is heard. Christ cries repentance to his people and declares who he is, using various names and titles. This article discusses the significance of each of those names.

Based off the account of destruction in 3 Nephi 9, Sorenson proposes that the Book of Mormon city of Jerusalem is located at the south of Lake Atitlan in Guatemala.

This article discusses the importance of the name of Jesus Christ throughout the Book of Mormon. This importance is emphasized in 3 Nephi when Christ names his church after himself.

Brown, S. Kent. "When Did Jesus Visit the Americas?" In From Jerusalem to Zarahemla: Literary and Historical Studies of the Book of Mormon, 146-156. Provo, UT: Religious Studies Center, 1998.

Conflicting views exist about when Jesus appeared to his New World disciples. Observations from the text suggest that he mercifully waited for the people to recover from the destruction that attended his crucifixion.

Jones, Clifford P. "The Great and Marvelous Change: An Alternate Interpretation." Journal of the Book of Mormon and Restoration Scripture 19, no. 2 (2010): 50-63.

The customary interpretation of 3 Nephi 11:1 has been that those around the temple in Bountiful were showing one another the “great and marvelous change” that had taken place in the land as a result of the physical destruction attending the crucifixion of Jesus Christ. However, Jones argues that the phrase “the great and marvelous change” used here refers to the infinite Atonement itself—the singular (then-recent) event that fulfilled the law of Moses and changed once and for all the eternal prospects for all of God's children. By examining the context in which this scripture appears and by interpreting related verses—especially those which emphasize the way in which most revelation is received—Jones argues that the atonement of Jesus Christ and the individuals’ subsequent change of heart would have been the main topic of their discussion and would therefore be an appropriate understanding of the scripture.

In a 1991 BYU Studies article, I identified and analyzed three core Book of Mormon passages in which the gospel or doctrine of Jesus Christ is defined. Each of these passages presents the gospel as a six-point formula or message about what men must do if they will be saved.

Encyclopedic entry on the Baptismal Covenant as found in the Book of Mormon.

Encyclopedic entry on the Baptismal Prayer as found in 3 Nephi when the Savior visits America.