Systems of government, punishment, and traitors are the focus of the chapters in this lesson. King Mosiah wisely developed a system of judges and established new laws, while Nehor and Amlici caused dissension and rebellion. 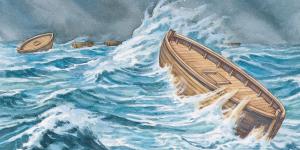 What Do the Jaredites Have to Do With the Reign of the Judges?
Mosiah 28:17 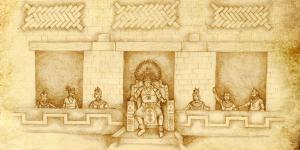 How Were Judges Elected in the Book of Mormon?
Mosiah 29:39 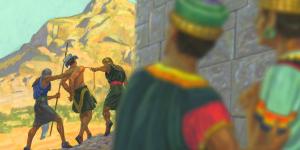 Why Did Nehor Suffer an “Ignominious” Death?
Alma 1:15 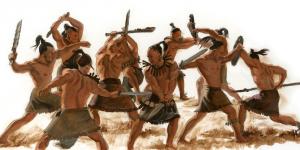 How Were the Amlicites and Amalekites Related?
Alma 2:11

Why Did Book of Mormon Prophets Discourage Nephite-Lamanite Intermarriage?
Alma 3:8

Video: Discussions on the Book of Mormon: Mosiah 29. Available at BYUtv.org.

Faculty from BYU's Department of Ancient Scripture discuss Mosiah chapter 29. a chapter that discusses government in general, as well as a change in Nephite government.

Video: Discussions on the Book of Mormon: Alma 1-4. Available at BYUtv.org.

Professors from the BYU Department of Ancient Scripture discuss the conflicts contained in Alma chapters 1 - 4, including anti-Christs, political unrest, and apostasy, as well as the doctrines contained in these tumultuous chapters.

This is Scripture Roundtable 165 from The Interpreter Foundation, in which we discuss the Book of Mormon Gospel Doctrine Lesson #21, Alma… Did Judge Righteous Judgments, focusing on scriptures in Mosiah 29 and Alma 1-4, bringing in various insights to help us better understand the scriptures. These roundtables will generally follow the 2016 Gospel Doctrine schedule of scriptures, a few weeks ahead of time.

King Benjamin, in an attempt to establish and promote peace, created a form of government that may be understood as democratic. The political system is not a democracy in the way the term is understood today, but the democratic elements become especially clear when viewed next to its autocratic Lamanite counterpart. Davis demonstrates how a democratic system tends to bring more peace to a nation and, interestingly, also more victory when war does come upon them. The young Nephite state encountered the types of risks experienced in the modern progression to democracy. Although the democractic state played a role in the Nephite nation, the most important lesson in the Book of Mormon’s politics is that God makes all the difference.

"The Book of Mormon and the American Revolution," by Richard Lyman Bushman, BYU Studies, Volume 17, no. 1

A common criticism of the Book of Mormon is that it is a product of Joseph Smith's nineteenth-century America. However, Bushman asserts that the Book of Mormon is not a conventional American book. Too much Americana is missing. One point Bushman touches on is the institution of judges. While at first it seems democratic and American in nature, the system of judges Mosiah established is a far cry from modern democracy, but rather fits better in the context of a Nephite monarchy.

King Mosiah established new specific laws throughout the land. Welch details the changes King Mosiah made to the existing law system and finds parallels to these laws in ancient Near Eastern society. While King Mosiah's law code was the basis for future rulings in judgment, these laws did not radically change the law of Moses or Nephite society as a whole. Rather, it clarified certain laws and made minor adjustments to procedure in Nephite society.

In Mosiah 29, Alma speaks of how the Lord is "extending the arm of mercy". This article discusses the meaning and significance of four specific gestures referred to in the Book of Mormon: stretching forth one’s hand(s), stretching forth the hand to exert divine power, extending the arm(s) in mercy, and clapping the hands to express joys. Beyond the fascinating meanings of these gestures in the Book of Mormon are the correlations that can be seen in the biblical text and in other Near Eastern cultures.

"The Trial of Nehor(link is external)," by John W. Welch, Legal Cases in the Book of Mormon

In Alma 1, a man named Nehor arises and causes great apostasy in the church. Nehor is tried and sentenced to death. In this article, Welch analyzes the trial of Nehor and what causes his capital punishment. While it seems harsh for Nehor to be put to death for a differing opinion, in ancient Israelite law, Nehor's brand of blasphemy was indeed punishable by death.

While the etymology of the name Alma has been debated in the past, Matthew Bowen proposes that the name is indeed Semitic and has Hebrew roots. He discusses the Hebrew etymology of Alma and compares Alma's introduction to 1 Nephi 1 to point out a subtle word play on Alma's name.

The name Alma appears more frequently in the Book of Mormon than any other name besides Nephi. The name has a logical derivation from a Hebrew root that means "youth" or "lad."

Szink identifies another possible Semitic source for the name Alma in the tablets of Ebla uncovered in Syria.

In the story of Nehor's death, it may seem odd that they had Nehor confess his sin before being executed. If Nehor was condemned to die, there would have been little merit in his confessing that he was wrong. However, Tvedtnes explains that in Israelite religion, confessing before an execution could help a convict at the final judgment of God.

In Alma 1, silk and linen are mentioned as fabrics used by Book of Mormon peoples. However, neither silk nor linen was thought to have been in pre-Columbian America. Sorenson explains how silk and linen could have existed in by using different materials found in the Americas.

In Alma, it states that the Nephites pitched their tents in the valley of Gideon. However, a minor criticism of the Book of Mormon is that there is no archaeological evidence for tents in Mayan or Aztec civilizations. While there may not be material remains of tents in Mesoamerica, there are various documents that mention the use of tents and help elucidate ancient Nephite culture.

"Alma’s Enemies: The Case of the Lamanites, Amlicites, and Mysterious Amalekites(link is external)," by J. Christopher Conkling, Journal of Book of Mormon Studies 14, no. 1(link is external)

In Alma 21 a new group of troublemakers is introduced—the Amalekites—without explanation or introduction. This article offers arguments that this is the same group called Amlicites in Alma 2 and that the confusion is caused by Oliver Cowdery’s inconsistency in spelling. If this theory is accurate, then Alma structured his narrative record more tightly and carefully than previously realized. The concept also challenges the simplicity of the good Nephite/bad Lamanite rubric so often used to describe the players in the book of Mormon.

Epanalepsis is the name of a significant literary device known in antiquity. It occurs where an author repeats certain words in the course of a lengthy sentence, to pick up a previous train of thought after a parenthetical aside, to remind the reader of the original idea of the sentence. This literary device is used in Alma 3:1 to talk about burying the Nephite dead.

Alma 3 mentions the mark and curse upon the Lamanites and how the Nephites did not intermarry or mix with their seed. Some critics of the Book of Mormon reject the ancient text on account of its supposedly racist commentary. In response to these critics, this article incorporates biblical examples and traditions to show how certain words and phrases that could be seen as racist were used to illustrate a larger message.

The 1830 edition of the Book of Mormon had Nephi prophesy that his descendants would become a "white and a delightsome people" through the Gospel of Jesus Christ. This was changed by Joseph Smith in 1840 to read that Nephi's descendants would become a "pure and a delightsome people." This textual emendation has understandably raised questions about the Book of Mormon's racial views, with some going so far as arguing that the book is "racist." A close reading of the text, however, reveals something far more subtle and ultimately profound; a teaching that reinforces the Book of Mormon's message that "all are alike unto God."