Book of Mormon Central / Come Follow Me / Book of Mormon
Gospel Doctrine Lesson #5: Hearken to the Truth, and Give Heed Unto It

To inspire class members to follow Nephi’s example of faith and willing obedience. 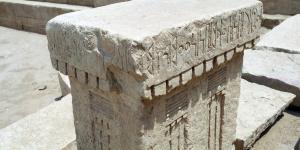 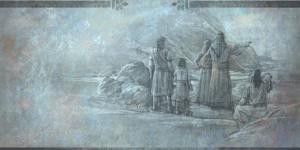 Why Would Nephi Call the Ocean Irreantum
1 Nephi 17:5 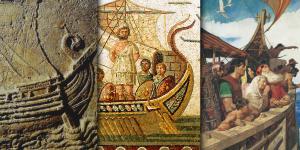 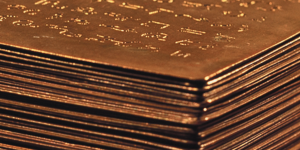 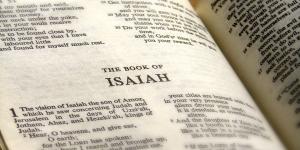 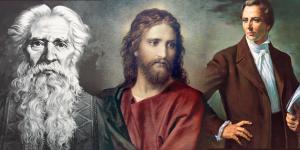 The Lord Guides...According to Faith and Diligence

"The 'Perfect Pattern': The Book of Mormon as a Model for the Writing of Sacred History," by Eric C. Olson, BYU Studies, Vol. 31, no. 2

The Nephite Prophets were masterful record keepers. In 1 Nephi 6, 19, and Jacob 1, they write openly about their purposes. This article explains the patterns for historical writing one may find in the Book of Mormon, which leads to a fruitful reflection on what might be a "perfect pattern" for recording personal and church histories in modern times.

Many books and papers have been written on what Nephi experienced as a learner under the tutelage of the Spirit and the angel in 1 Nephi 11–14. Ironically, his experience as a student on the mountaintop was immediately followed by many opportunities for him to become a teacher in the wilderness to his family. Nephi’s interactions with the Spirit and the angel likely served as more than just a vision and discovery of eternal truths; his divine tutelage could also have served as a teacher-training experience. This idea leads us to ask the following questions: (1) What information exists in the chapters immediately following Nephi’s vision that reveals what kind of learners Laman and Lemuel were compared to Nephi? (2) Is there any textual evidence in chapter 15 that Nephi employed the same methods and approaches with his brothers that had been so effectively used on him by his own heavenly tutors? (3) What can we discover about learning and living by comparing and contrasting Nephi and his brothers through their wilderness wanderings in chapter 16? And finally, (4) what implications might these chapters and their principles hold for teachers and students of the gospel in our day?

"What Is Isaiah Doing in First Nephi? Or, How Did Lehi's Family Fare So Far Away from Home?" (link is external)by S. Kent Brown, from From Jerusalem to Zarahemla: Literary and Historical Studies of the Book of Mormon(link is external)

The prophet Nephi incorporated words of Isaiah in his first book for both public and private reasons. Nephi openly declared that he intended to deepen people’s faith in the Holy One of Israel while linking his family’s experiences to prophecies concerning the scattering and gathering of Israel. Evidence in the Book of Mormon points also to the sorrow and estrangement which the family of Lehi and Sariah felt as they fled their home in Jerusalem and traveled across deserts and oceans to the New World. In Isaiah, Nephi found calming solace as well as evidence of prophetic fulfillment.

"The Exodus of Lehi Revisited,"(link is external) by Mark J. Johnson, from Journal of Book of Mormon Studies

To the many studies of what has been called the Exodus Pattern in the Book of Mormon, comparing the exodus of the children of Israel out of Egypt and the exodus made by the Lehites from Jerusalem, I add two additional parallels. The first deals with the death of Ishmael in the desert and the second with the transfiguration of Nephi (1 Ne. 17).

In 1 Nephi 17:42 we learn that Lehi's family was "led forth by [God's} matchless power into the land of promise." Throughout this lecture, Hugh Nibley discusses the many ways in which the Lord guided Nephi as he built a ship and led his family toward the promised land.

Hamblin discusses the symbolic use of Nephi's bow as a political symbol, and also discusses ancient weapon technology. If a bow was replaced, the arrows also had to be replaced to match the specifications of the bow.

On November of this year, Warren Aston sat down with Neal Rappleye for an interview about his life-long study of the Book of Mormon. Warren Aston was the archaeologist of Nahom, the purported place where Ishmael was buried.

Biographical entry on what is known of the Book of Mormon figure Ishmael.

Around 700 BC, a wealthy man in southern Arabia donated three limestone altars to a temple dedicated to Ilmaqah, the moon god. Inscribed on each altar was a text identifying him as the grandson of Naw'um of the Nihm tribe. The three altars were unearthed in 1988 by German archaeologists amid the ruins of the Bar'an temple near Marib, in modern Yemen. They provide the earliest known reference to the Nihm, who today, nearly three millennia later, retain the name and are one of Yemen's largest tribes.

Biblical “minimalists” have sought to undermine or de-emphasize the significance of the Tel Dan inscription attesting to the existence of the “house of David.” Similarly, those who might be called Book of Mormon “minimalists” such as Dan Vogel have marshaled evidence to try to make the nhm inscriptions from south Arabia, corresponding to the Book of Mormon Nahom, seem as irrelevant as possible. Rappleye and Smoot show why the nhm inscriptions still stand as impressive evidence for the historicity of the Book of Mormon.

This piece discusses the etymology and ethnic origin of the NHM inscription discovered in southern Arabia in order to corroborate the historicity of the Book of Mormon.

"Ishmael and Nahom,"(link is external) by Jody Livingston, original artwork

This article dissects the Book of Mormon term Irreantum and delves into its linguistic characteristics to determine whether the term could have originated from Hebrew, Egyptian, ancient South Semitic, or another language.

In the past, experts have assumed that primitive sailors would have found it impossible to cross the oceans between the Old World and the New. However, John Sorenson here concludes that the evidence for transoceanic contacts now drowns out the arguments of those who have seen the New World as an isolated island until ad 1492.

Even in early Church history, individuals sought to discover where the Book of Mormon took place geographically. As one of the earliest attempts at Book of Mormon geography, Frederick G. Williams proposes Chile as a possible location for Lehi's disembarkation.

This article notes that because of all the striking similarities between the New and Old Worlds, these similarities must have developed either independently, or arouse out of transoceanic contact. Jett explores the possibility that the Old and New worlds could have very well collided before 1492 through water passage.

This article treats several examples in the New World of Old World influences and seeks to provide evidence of transoceanic contact before Columbus.

This article uses modern weather patterns and geographical analysis to provide possibilities for the sea route Lehi may have taken. The article first discusses the possibility of Lehi crossing from Arabia through the Indian Sea to Indonesia. Sorenson then discusses a possible route across the Pacific ocean. Sorenson also discusses voyage length and concludes that the voyage could have been completed in a little less than half a year.