Book of Mormon Central / Come Follow Me / Book of Mormon
Gospel Doctrine Lesson #18: God Himself Shall Redeem His People 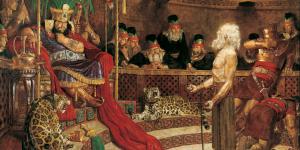 Why Would Noah’s Priests Quiz Abinadi on Isaiah?
Mosiah 12:20–21 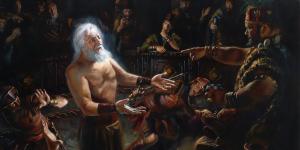 Did Abinadi Prophesy During Pentecost?
Mosiah 13:5 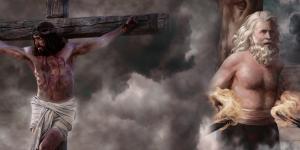 Why Did Abinadi Talk About the Suffering Messiah?
Mosiah 14:4 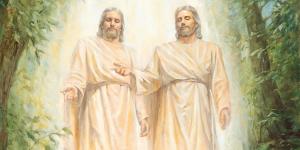 How is Christ Both the Father and the Son?
Mosiah 15:2 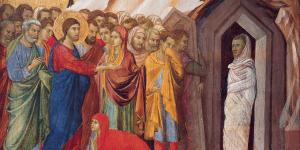 Why Does Abinadi Use the Phrase "the Bands of Death"?
Mosiah 15:8 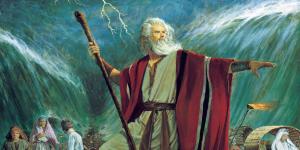 Why Did Abinadi Stretch Forth His Hand as He Prophesied?
Mosiah 16:1 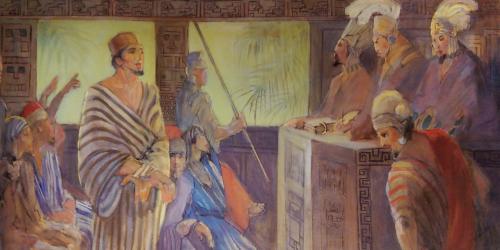 Why Did Book of Mormon Prophets Speak of Future Events as if They Had Already Happened?
Mosiah 16:6 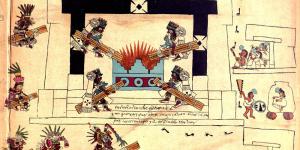 Why was Abinadi Scourged with Faggots?
Mosiah 17:13

Abinadi, Jacob, and Nephi all explain that "none of the prophets have written, nor prophesied, save they have spoken concerning [the] Christ" (Jacob 7:11). In particular, Isaiah wrote powerfully about the mission of the Redeemer. Many of his words are quoted in the Book of Mormon, by Nephi, Jacob, Abinadi, and Jesus during his visit to the Nephites. In beautiful language, Isaiah describes his understanding of the Savior as the Suffering Servant in Isaiah 53: "He is despised and rejected of men; a man of sorrows, acquainted with griefbut he was wounded for our transgressions, he was bruised for our iniquities: the chastisement of our peace was upon him; and with his stripes we are healed" (Isaiah 53:3, 5). When Abinadi was on trial for his life, he defended himself against the accusations of the priests of Noah by reciting and interpreting for them this very chapter (see Mosiah 14-16). To aid your study of this passage of scripture, New Testament Chart 10-15 lists over 30 ways in which Isaiah's prophecy relates quite explicitly to the life, suffering, and atonement of the Lord Jesus Christ.

Chart 9-124: "Did Abinadi Prophesy against King Noah on Pentecost?" from Charting the Book of Mormon

Abinadi may very well have prophesied to King Noah and his priests on or near the day of Pentecost, as textual clues in Mosiah 11–17 suggest. Pentecost in ancient Israel was a three-day festival in May celebrating the new wheat and bounty of spring. It was also a time for carefully listening to and celebrating the law of Moses, since God gave the law to Moses on Sinai at approximately this time in the year. Abinadi's cursing of grain and sending destruction upon crops are a reversal of the themes celebrated at Pentecost. Ironically, at the same time when the priests should have been venerating the law, Abinadi rehearsed to them the Ten Commandments and chastised them for not keeping it. These and other clues listed in this chart are further evidence attesting to the Book of Mormon's roots in ancient Israel.

Halverson, Taylor. "Mosiah 12-16: Martyr in Disguise." Interpreter Resources for Students and Teachers. May 11, 2016.

"Textual Similarities in the Words of Abinadi and Alma's Counsel to Corianton," by John Hilton III, BYU Studies, Volume 51, no. 2

"'Stretch Forth Thy Hand and Prophesy': Hand Gestures in the Book of Mormon," by David Calabro, from Journal of Book of Mormon Studies

In Mosiah 12, Abinadi prophesies by stretching forth his hand. Often overlooked in scriptural text, hand and arm gestures are often used to convey meanings that complement the verbal lessons being taught. This article discusses the meaning and significance of four specific gestures referred to in the Book of Mormon: stretching forth one’s hand(s), stretching forth the hand to exert divine power, extending the arm(s) in mercy, and clapping the hands to express joy. Beyond the fascinating meanings of these gestures in the Book of Mormon are the correlations that can be seen in the biblical text and in other Near Eastern cultures. Also insightful, specifically in reference to Moses’s hand movements at the Red Sea, is the way in which the Bible, the Book of Mormon, and other extra canonical writings build on each other to give a fuller interpretive picture.

Matthews takes a look at the life of Abinadi from various perspectives, first from the historical and circumstantial record of the man Abinadi—his life, ministry, and death; and second, doctrinally. At the end of the narrative in Mosiah, Abinadi faces a tragic martyr's death, but by so doing brings people unto Christ.

"Scourging with Faggots," by Brant Gardner, from Insights

In Mosiah 17, the priests of King Noah condemned Abinadi to death and they "scourged his skin with faggots". While this phrase and execution method seems strange, Brant Gardner brings forward Mesoamerican evidence that seems to suggest that scourging or whipping with firebrands was indeed a legitimate means of execution in the New World.

In Mosiah 17, Abinadi is condemned to death. His execution occurs by being scourged by faggots. This singular phrase has generated discussion as to what exactly that means. Since the idea of scourging or whipping someone with faggots seems strange, Royal Skousen proposes that the word "scourged" be emended to read "scorched".

"The Fatherhood of Christ and the Atonement," by Paul Y. Hoskisson, from Religious Educator

Paul Hoskisson discusses Abinadi's discourse in view of Christ's various characteristics and natures. Abinadi preaches about Christ being both the Father and the Son. Hoskisson notes that Abinadi's discourse is full of various dualities. Christ has dual titles, capacities, and natures. Christ is both Father and Son, born of God and born of man, he is of spirit and of the flesh, and, most importantly, he did not have to die but had the ability to die.

In the early 1900s, some discussion arose among Church members about the roles of God the Father and Jesus Christ. The First Presidency and Quorum of the Twelve Apostles issued the following in 1916 to clarify the meaning of certain scriptures where Jesus Christ, or Jehovah, is designated as the Father.

Isaiah 53 is unsurpassed in the Book of Mormon, if not in all of scripture, for its detailed prophetic images of the suffering and death of the supernally meek servant of God. Quoted in its entirety by Abinadi in Mosiah 14, near the middle of his response to the priests of Noah, this beautiful poem formed not only the crux of Abinadi's theological testimony and legal defense, but also comprised one of the mainstays of prophetic knowledge in the Book of Mormon about the coming atonement of the Savior. While Abinadi and others in antiquity interpreted Isaiah's suffering servant messianically, the Hebrew text left enough unstated that Noah's wicked priests could adopt another reading.

"Abinadi's Commentary on Isaiah," by Monte S. Nyman, from The Book of Mormon: Mosiah, Salvation Only Through Christ

In the midst of Abinadi's trial, the priests of King Noah begin quizzing Abinadi on the meaning of Isaiah. While this seems an odd thing to do in a legal proceeding, the priests of King Noah were hoping to trap Abinadi by accusing him of being a false prophet for prophesying contrary to the priests' interpretation of Isaiah. Despite the priests intentions, Abinadi quotes Isaiah and provides powerful commentary that elucidates the atoning mission of Jesus Christ. Nyman goes through and discusses the various commentary Abinadi provides to strengthen our testimonies in the Savior, Jesus Christ.

"Abinadi and Pentecost," by John W. Welch, from Reexploring the Book of Mormon