For more information on the book, visit

Today, April 1, is not only April Fool’s Day (an irony Hugh Nibley would appreciate), but also the eleventh anniversary since the appearance of the nineteenth and last volume of the Collected Works of Hugh Nibley, entitled One Eternal Round. This book was Hugh’s master work, decades in the making.

This series is our way of celebrating the availability of a new, landmark publication entitled “Hugh Nibley Observed.”1 It is available today in softcover, digital, and audio versions, and, in May, a beautiful hardback edition. The book contains many never-before-told anecdotes and stories that weave together Nibley’s life and scholarship. We hope it will not only delight and inspire old friends already familiar with Nibley’s work but also many new friends who may have heard stories about the man but have never read anything by or about him.

Our theme today revolves around the question: “Who was Hugh Nibley?” For links to this week’s text, audio, and video features, see below.

Who was Hugh Nibley?

“Hugh Nibley is simply encyclopedic. Though I do not agree with his views I hesitate to challenge him; he knows too much.”
—Jacob Geerlings, classicist and historian, University of Utah2

“He knows my field better than I do, and his translations are elegant.”
—Mircea Eliade, history of religions, University of Chicago3

“He struck me as a first-rate intellect.”
—Jacob Neusner, Bard College, scholar of Judaism and one of the

most published authors in history4

“Revelation is not a puppet affair for Mormons. … ‘Do we have a right to tell God his business?’”
—Klaus Baer, Egyptology, University of Chicago5

“There are two geniuses in the western states—myself and Hugh Nibley.”
—Francis D. Wormuth, political scientist, University of Utah7

“It is obscene for a man to know that much!”
—George MacRae, former dean of the Harvard Divinity School8

Nibley was sometimes one of the harshest critics of Brigham Young University, yet one of the Church’s most faithful and loyal advocates:

“Hugh is above the fray … because his commitments is so visible and has been so pronounced and so repetitively stated that that’s not even the issue. So then we get on to, ‘What is Hugh saying?’”
—Neal A. Maxwell, former member of the Quorum of the Twelve Apostles9

“I have respected him highly for his great scholarship and for his quiet and humble manner. He knows what he is saying, but he does not shout it.”
—Gordon B. Hinckley, former president of the Church10

“During all of the more than fifty years I have known Hugh Nibley, I have been edified, inspired, and motivated by his many writings. I count myself among his foremost admirers and devoted friends.”
—Dallin H. Oaks, First Counselor in the First Presidency11

“One thing that he has that I would give anything to have is the gift of absolute faith. … He has it. I don’t.”
—Paul Springer, longtime friend12

“He is one of a kind—it is a very good kind.”
—Boyd K. Packer, former member of the Quorum of the Twelve Apostles13

People liked Hugh Nibley because he was not afraid to say things that we wish we could say, to espouse unpopular causes, to thumb his nose at fashion, or to buck the crowd:

“He's impatient with mediocrity, he's impatient with irrelevance, and to the casual eye, that may be seen as eccentricity, when in fact I think it's a reflection of his deepened discipleship.”
—Neal A. Maxwell, former member of the Quorum of the Twelve Apostles14

“The rumpled hat and baggy pants were his own version of the monk’s cassock, a sign not that he didn’t care, but that he knew the danger of caring too much.”
—Alex Nibley, son15

“No one knows what he knows, and that of course also is a problem with knowing him.”
—Truman G. Madsen, philosophy, BYU17

“Does he still talk so fast that no one can understand what he's saying?”

“Sometimes I think I don't know him at all.”
—Phyllis Nibley, Hugh’s wife19

“If God had wanted my lawn mowed, he would have made grass differently!”
—Hugh Nibley, irate when ward members arrived to help clean up his yard

In his academic life, his discipleship, and his personal life, there has never been anyone quite like Nibley—and probably will never be again.

If you have never seen “The Faith of an Observer,” the entertaining and uplifting biographical video of Hugh Nibley’s life, you are in for a treat. Though the film has been available for many years in an online version made from an old videocassette, for the first time we are posting a much improved digital version.

Of great importance for those who want to follow Hugh’s rapid-fire speaking style, this is the first version to contain English subtitles. English, at least, except for the parts where he suddenly breaks into spontaneous German, Arabic, or Egyptian …

A pdf transcript of the film and audio files of the video are also available for download.

Book of Mormon Central · Faith of an Observer 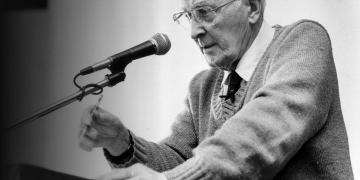