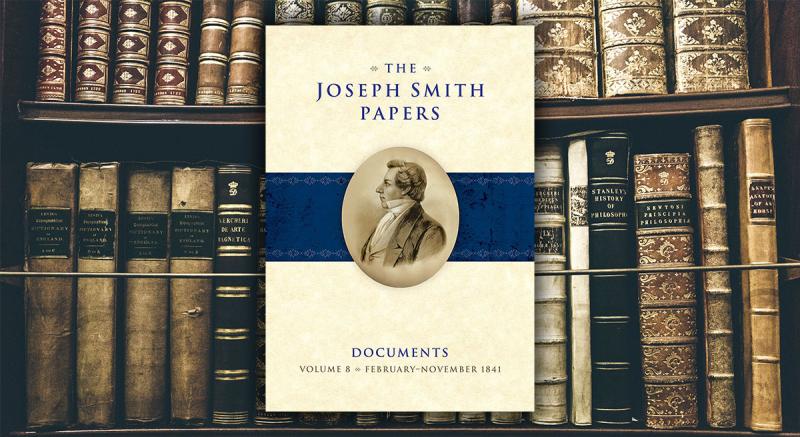 A new volume of the Joseph Smith Papers has been published by the Church Historian’s Press. The Joseph Smith Papers, Documents, Volume 8: February–November 1841 is the latest volume in the documents series, which “present[s] in chronological order with historical introductions and annotation most of the extant (or surviving) documents owned, created, or authorized by [Joseph] Smith.” The texts in this series comprise revelations, letters, reports of discourses, editorials, minutes of meetings, and other documents.

As explained by Brent M. Rogers, one of the volume’s editors, 1841 “was a relatively peaceful and quiet year for Joseph Smith.” Much of the Prophet’s activity during this year focused on building Nauvoo, Illinois and getting a foothold in the cultural and political landscape of early-1840s Illinois. This was “a time filled with optimism,” Rogers and the other volume editors write in the new book’s introduction, “but problems were brewing under the calm surface, particularly with neighbors not of the faith.” Some of the documents in the new volume that reflect this growing tension include the hopeful benediction given by Joseph Smith at the laying of the cornerstone of the temple as well as Joseph’s caustic reply to the newspaper editor Thomas Sharp, who had run an article critical of Joseph’s political power:

Sir––You will discontinue my paper––its contents are calculated to pollute me, and to patronize the filthy sheet––that tissue of lies––that sink of iniquity––is disgraceful to any mortal man.

Yours, with utter contempt,

As volume editor Brett D. Dowdle comments, “the documents in this volume offer a very humanizing and approachable portrayal of Joseph Smith. Here we see Joseph struggling to pay debts, expand Nauvoo, gather the saints, handle opposition from critics, and restructure church government to give him more time to devote to spiritual matters.”

While this new volume does not contain much that is directly relevant to the Book of Mormon, there are a few notable exceptions. The first is the memorandum cataloguing the items deposited in the cornerstone of the Nauvoo House on 2 October 1841. Included in the deposit was the original manuscript and a printed copy of the Book of Mormon. On the occasion of depositing the manuscript in the cornerstone, Joseph reportedly declared that it had caused him “a great deal of trouble to preserve,” and so now he “deliver[ed] it up to the Lord and will not have care of it any longer.”2 While well-intended, depositing the manuscript in the cornerstone for preservation unfortunately had the opposite outcome. As explained by Heidi Bennett,

Other notable documents in this volume include sources related to Orson Hyde’s journey to and dedication of the Holy Land for the return of the Jews and an important Nauvoo city ordinance established on 1 March 1841 guaranteeing religious freedom for all sects and denominations:

Be it ordained by the City Council of the City of Nauvoo, that the Catholics, Presbyterians, Methodists, Baptists, Latter-day Saints, Quakers, Episcopals, Universalists, Unitarians, Mohammedans [Muslims], and all other religious sects and denominations whatever, shall have free toleration, and equal privileges in this city.4

Documents, Volume 8 can be purchased online at Deseret Book and Amazon. Most of the documents printed in this volume can be accessed for free on the Joseph Smith Papers website.