New Book Highlights Hebrew-Like Features in the Book of Mormon 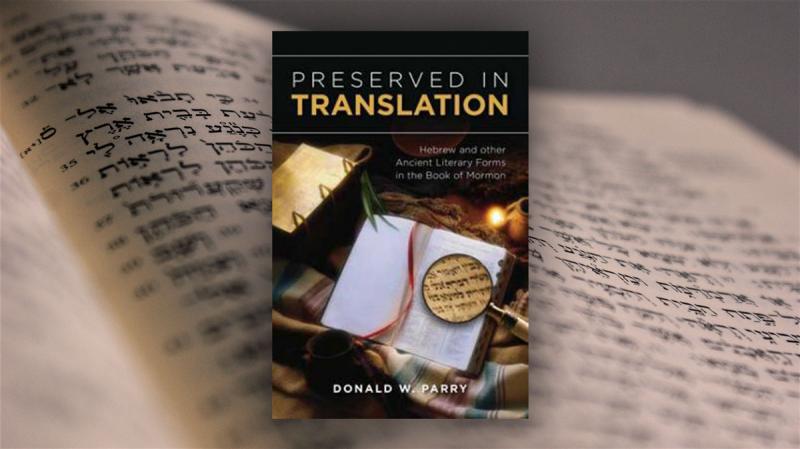 President Russell M. Nelson has said, “Because the Book of Mormon is a translation of a modified Hebrew language, it contains many Hebraisms.”1 A new book by Dr. Donald W. Parry, Preserved in Translation: Hebrew and Other Ancient Literary Forms in the Book of Mormon (Deseret Book and BYU Religious Studies Center) provides numerous examples that support this claim.

For more than 25 years, Dr. Parry has been a professor of Hebrew at BYU, where he has taught Biblical, Qumran, and Mishnaic Hebrew. He has also done extensive academic research on the Hebrew Bible and the Dead Sea Scrolls, which he has presented and published in prestigious academic venues throughout the world. Throughout his career, Parry has drawn on his deep understanding of ancient Hebrew to study the linguistic and literary features of the Book of Mormon.2

In Preserved in Translation, Parry combines his own expertise with that of other scholars who have published studies on the Hebrew-like features of the Book of Mormon,3 producing a thorough survey and introduction to a fascinating topic that both provides evidence for the Book of Mormon’s authenticity, and enhances our understanding of the Book of Mormon central purpose: to testify of Christ.

The book is organized into four parts: (1) parallelism and poetic structures; (2) the art of repetition; (3) prophetic actions and language; (4) other Hebraic patterns. Each of these four sections consists of several short chapters focusing on a specific literary or linguistic feature characteristic of biblical Hebrew and also found in the Book of Mormon. In each, Parry provides ample examples of each feature in both the Bible and the Book of Mormon.

As Parry observed, “The Hebraisms and other ancient literary forms in the Book of Mormon are consistent with its Hebrew background and antiquity.” The cumulative effect of all the Hebrew-like characteristics is impressive. “They are so numerous that they cannot be explained away as coincidence, nor could a modern writer have integrated them so naturally and correctly throughout the entire narrative” (p. xx). Importantly, some of the features Parry highlights cannot be explained as attempts to imitate the King James Bible. “[T]hey are simply too subtle, or even entirely unknown, in the [King James] Bible to have attracted Joseph’s attention” (p. xxvi).

In Parry’s expert opinion: “It is inconceivable that Joseph Smith had technical knowledge of these various archaic Hebraisms, Hebrew-like configurations, literary forms, and other modes of expression, for many of them are subtle in their contexts and relatively inconspicuous in the Old Testament” (p. xx).

Preserved in Translation is available in both hardback and ebook formats, online and in stores through Deseret Book, and as an ebook through Amazon.com.